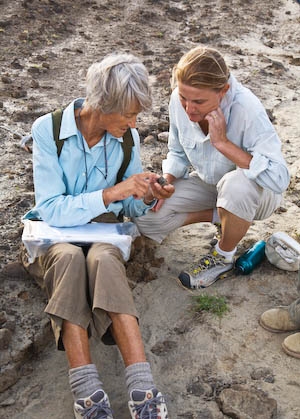 What unnerves Louise Leakey is not so much the banditry on the only supply road or the gun battles between herders who sometimes mistake researchers for their enemies — it’s the goats. When a fossil in the Lake Turkana region in northern Kenya makes its way back to the eroding surface after several million years, it’s just a matter of time before, as Leakey puts it, “a herd of 200 to 600 goats with those little hooves, four apiece, goes straight over it.” To lose this race against time is to lose specimens forever — including remains of our ancestors.

For millions of years, the Turkana Basin of northern Kenya has collected water and drawn life to it. Sediments have buried animal bones; erupting volcanoes along the Rift Valley have left tuffs with easy-to-date strata. Today the Turkana Basin affords 1,200 square miles of covetable fossil exposure and 40 years of carefully-worked out geology. The east side contains the hominid-bearing past four million years, where the famed Leakey family of paleoanthropologists has made ancestral-tree-shaking discoveries belonging to the genera Australopithecus, Kenyanthropus, and Homo. The west side of the lake offers much older fossils from the Miocene, Oligocene, and Cretaceous eras (including dinosaur remains).

Occasional rains expose the fossils not only to the light of day, but to the damage done by livestock led by herders searching for grazing. Researchers now claim to have found a way to collect fossils quickly while motivating the people to protect their heritage, a plan that involves a shift from 10-week field seasons to 50 weeks of fossil collecting annually.

The activity will fall under the aegis of the newly formed Turkana Basin Institute (TBI). Guided by Richard Leakey, his wife Meave and daughter Louise, it has raised $2.1 million to build a permanent field station at Ileret, east of Lake Turkana. Since April 2007, this camp has been transformed from a few tents into a field worker’s wish list: a stone lab with plenty of curatorial space, staffed kitchens, metal prefab buildings, and a garage with a full-time mechanic. The directors hope that year-round work will accelerate fossil recovery fivefold. Next year a second station is to be built on the lake’s west side.

“What we’re proposing is revolutionary,” says Lawrence Martin, Stony Brook University paleoprimatologist and TBI’s director. “The Turkana Basin Institute will enable us to move away from a sort of Victorian model of fossil collecting where, typically, gentlemen and their lady scientists go out and set up a tented camp for a few months and collect fossils.” The institute is offering its permanent facilities to outside researchers at a fraction of what it would cost them to bring their own support to this remote region, a four-day drive from Nairobi.

So far, Kenya’ recent turmoil — which began after December’s troubled election that resulted in deadly violence, split along ethnic lines — has not affected the institute. In fact, life goes on as usual in the north, where the people of Ileret have long led a marginalized existence with scarce food and water. The Turkana scientists will continue their tradition of employing local people, but they now hope to add many more community jobs in labs, museums, dining facilities — and a new field school to train both African and overseas students. Working with the National Museums of Kenya as an official repository for the government’s local collection, TBI also intends to attract tourists to the spot producing so many major discoveries. The scientists hope to help the region’s people recognize the significance of their heritage, while also channeling benefits from the research to sustainable livelihoods for the community. Moreover, the institute is partnering with two African and three Western universities to develop career paths to help keep Kenyan Ph.D.s in the country.

Not everyone seems enamored of the institute, however. Rutgers University paleoanthropologist Jack Harris says he is content using the humbler Koobi Fora field station run by the National Museums, south of Ileret. Harris expressed concern that TBI might be encroaching upon the government’s authority in the region.

Martin argues that TBI is not trying to control the Turkana Basin — “We’re just trying to support science and support Kenya.” He acknowledges that all are welcome to come and seek excavation permits from the National Museums of Kenya. “We just think that it’s a tough area to do work, and if we have the infrastructure to help — to provide vehicles and food and well-trained staff, a lot of people will want to avail themselves of those,” he adds. By inviting all researchers in the region to an August workshop at the new Ileret field station, TBI’s leaders hope to allay suspicions, facilitate working together and radically increase our understanding of human evolution.

Fredric Heeren is a freelance writer based near Kansas City, Kan.